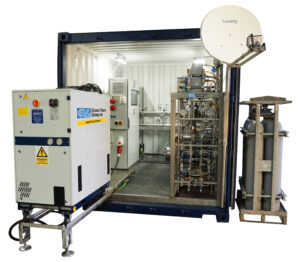 A degreasing product is a cleaning product made for removing grease, oils, corrosion inhibitors, cutting fluids, finger prints, handling soils, and other contaminating elements that have commonplace in assembly, stamping, other types of metal fabrication, refineries, motor repair, airplane hangars, and other areas of production.

In cleaning with Super Critical CO2, amongst other things, degreasing can be performed. The Supercritical CO2 flushing system fits umbilical’s and control lines perfectly, because of the low drop in pressure over longer distances, which can be higher than 20 km, with a small inner diameter lower than ¼”. This means that a turbulent flow can be maintained during degreasing all the way thru, and a cleanliness of AS4059 Class 3 / ISO 4407 12/9 has made proof of concept in testing. However, it can also be fitted to other applications, including degreasing.

Conventional flushing is a well-known method for cleaning the inside of systems, but is not as effective when it comes to degreasing, as with SCCO2. Having a turbulent flushing flow is mandatory for this method of cleaning to work effectively. A challenge, when using conventional flushing fluid in systems like umbilical’s and control lines, is the ability to keep a turbulent flow from end to end. It basically requires a huge pressure drop of more than 30,000 PSI. This kind of pressure drop is bigger than the maximum pressure that most pipe systems are rated to withstand.

On an earlier job we utilized the SCCO2 unit was on a North Sea platform as a last ditch effort to remove a potential blockage inside a one way diesel line towards a well before they would have to replace the entire well system. We were given a chance to prove the units flexibility and solvent effect and it took us only 3 days to reach a break-through by adjusting the CO2 , it’s density and solvent effect. This experience revealed that the SCCO2 has huge possibilities for extreme problem solving when it when we’re talking contamination and blockages inside long and narrow pipeline conditions.

Supercritical CO2 is the solution
The reason behind the achieved cleanliness and low-pressure drop is that Supercritical CO2 has the same capacity as oil, but with a way lower viscosity, about 10 times lower than water. This makes it perform better than most standard flushing systems that typically have a bigger pressure drop, sometimes over 60.000 PSI over a ¼” OD 13.000-meter system. The SCCO2 has a drop of up to 3.000 PSI and keeps a Reynolds No. of around 20.000. You need a Reynolds number higher than 3000 to maintain a turbulent flow, and in long distances, this is not possible with standard flushing techniques. The term “supercritical” is a state that is not quite a fluid, and not quite gas, but instead a state that acts as a mix of these two. This means that with SCCO2 we can utilize the benefits of both of those two states.