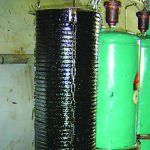 The formation of varnish in a lubrication system is a widespread problem impacting many industries. Varnish forms because of lube oil degradation, largely from the extreme temperatures and oxygen existing in combustion turbines. A buildup causes excessive wear on parts, can lead to bearing failures and can cause critical components to seize. These failures are costly, not only because of the repair expenses, but also because of the off line lost revenue. Varnish results in a thin film of soft insolubles deposit often found on bearings, servo-valves, and other metal surfaces.

Varnish forms as coatings on surfaces of oil systems. Varnish has been found to be one of the most damaging impurities in oil used in industry. Varnish is a soft contaminant with a strongly negative influence on the oils lubrication ability, thus causing reduced reliability of machinery in the same way as heat, particles and moisture.

A major problem with varnish is that the particles are smaller than what most filters can filter out. This is why they generally cannot be removed by means filtration in the traditional sense. Varnish purification systems can remove soluble and insoluble particles passing through them. It is, however, the clean oil running through the system, which removes the coatings of varnish. These coatings are dissolved by the oil and transported to the purification system. This means that the cleaning process is executed while production is running at full speed.

Lubricants and oil that have been strongly oxidized, and in which a heavy formation of varnish has taken place, can perhaps not be cleaned and remedied and used again. However, in most cases it is possible to remove varnish and other soft contaminants from the oil, allowing continued use. Through many years, Ocean Team has gained vast experience and knowledge in this field and has become a specialist in varnish removal, using mainly two different high-performance technologies for varnish clean-up:

Adsorption, not to be confused with absorption, and filtration are fundamentally different. Adsorption requires an understanding of physical chemistry, whereas filtration is based on physical forces and removes the particles by means of compression and seepage. By combining adsorption and filtration, you can increase the efficiency of varnish removal in a relatively simple, cheap and compact way.

Adsorption is the physical and/or chemical binding of atoms, molecules and particles to a surface, the so-called adsorbent, which can be activated carbon or silicate. Adsorption should definitely not be confused with absorption. Absorption is when a liquid is soaked up by an absorbing material, like when water is soaked up by a sponge.

These systems are installed in an off-line circuit and the adsorbing material typically used is depth-filtration cellulose filter cartridges. Such filters ensure the combined removal of particles, moisture and varnish in a single system. They have a large surface and, because of their chemical nature, the cellulose fibres are great for retaining oxidized organic molecules, for instance varnish. The adsorption purification system is also a great method of purifying transformer insulating oils.

Do you have varnish problems? Based on an analysis of the your system Ocean Team can determine which method is the most effective and clean your system to your satisfaction.